Laboratory of Arts and Nanoworld

The Laboratory of Art and Nanoworld exhibition interconnects science and art. It introduces the world of nanotechnology materials and structures, which brought creative inspiration to the exhibiting artists and scientists, through interdisciplinary works.
The exhibition represents a team collaboration between students of the Faculty of Art and Design at the UJEP in Ústí nad Labem and scientists from CEITEC VUT in Brno on the project Art and Science Laboratory, initiated by Štěpánka Piskáčková through the focus of her dissertation The Possibilities of Interdisciplinarity of Art and Natural Sciences (study programme Visual Communication at the Faculty of Art and Design at the UJEP in Ústí nad Labem). The Art and Science Laboratory prides itself on an open dialogue between artists and scientists, which is why representatives of the CEITEC Nano research infrastructure, in addition to sharing their knowledge and providing technical support, are also involved in the design and implementation of specific works. Interdisciplinary teams have been formed and their common interests are creativity and a deep interest in current scientific trends. The seemingly incompatible relationship between reason and intuition reveals the invisible materiality of the nanoworld. The invisible becomes perceptible when it shows itself to its observer in a creative language. Revealing structures, examining material properties, illusively materializing both, invisible nano-objects and processes of scientific investigation. The delivered scientific knowledge becomes, thanks to this specific collaboration form, in a way more graspable and a bit more comprehensible information even for laymen.

Štěpánka Piskáčková, Barry Wan & Peter Kepič: Silicon Age
audiovisual installation, 2022 / ▢
Today’s technology makes our lives easier. With the help of visual material (photos and videos) we are able to follow events around the world, educate ourselves in a very short time and being entertained almost continuously. However, this constant data flow often results in an oversaturation of information that we are not interested in or that is not always true. This can lead to informational superficiality and the drawing of decisions and opinions that are not understood in sufficient depth or cannot even be understood. This is also our time. In this audiovisual work you can, through a four-channel projection of 133 hexadecimal codes of images captured during 21 hours of life, perceive the enormous invisible flow of information that comes at us every day. The only escape for you will be the message created in 21 hours on the surface of a silicon device, which will transfer you from the visible world to the invisible nanoworld. The nanoworld that mediates the enormous flow of information. A nanoworld where the laws of physics as we know them don’t work anymore. A nanoworld where a piece of hair is as wide as a continent. A nanoworld where the famous physicist Richard Feynman said, “There’s Plenty of Room at the Bottom.” And a nanoworld that is created artificially and daily on the surface of billions of silicon chips to make our appliances, computers and phones work. Welcome to our time — the silicon age.

Karim Tarakji & Ondřej Červinka: Red Shift
holographic projection, 2022 / **
A light installation loosely based on the theme of the red shift, opening questions about the invisible aspects of life that are the marvel of all existence. The work is inspired by Frank Malina’s light objects, using new possibilities to create content on the edge of luminous abstraction. Things so old that their light has become invisible.

Klára Samcová & Jan Michalička: Pozlátko (The Glitter)
kinetic installation, 2022/ **
Flies dressed in gilded sweaters flying around an object inspired by the shape of gold crystal. The crystalic object, although it draws attention to itself looking flashy, is in fact gilded with fake gold. The housefly is a so-called cosmopolitan animal, living unchanged almost everywhere in the world. It is often despised by humans, who see it as an inferior and annoying creature. Does a fly cease to be a fly when it is dressed in a gold sweater? Could we approach this situation in the same way as when we say “clothes make the man”? And isn’t the gold jacket more like a straitjacket? The inspiration came from a transmission electron microscope image of gold and research that examines metal crystals. The nanoscale world is a mystery to the naked eye. So is the testimony of this installation, where we are basicly unable to distinguish real gold from the imitation without further technology.

Václav Mach & Jan Michalička: AISI 304 (1.4301)
object series, 2022 / *
Stainless steel is nowadays an irreplaceable material — thanks to its mechanical, chemical and physical properties, it is used as a basic construction material in a wide range of scientific fields. The decision to work with this material was based on the fact that the body of the transmission electron microscope is made of stainless steel. The form of the stainless steel objects is based on the analysis of the atomic structure of the stainless steel samples from which the objects themselves are made. The shape of the objects is derived from the shape of the martensitic structure, which was accidentally discovered during the observation. The martensitic needles were in a very interesting and regular arrangement, which Jan Michalicek managed to capture from several angles, thus creating a relatively accurate diagram of the distribution of the individual objects. The resulting installation of objects essentially gives the viewer a glimpse of an otherwise unseen component of this everyday material.

Laura Fiľáková & Jan Čechal: Intuition, Art and Science: Evocation, Symmetry, Reaction
zin, photographs, 2022 / *
In this artistic-scientific work, the authors engage in collaborative intuitive creation as a way of understanding each other’s approaches to their field. Intuitive practice is not new in the art world, but at the same time it creates a clonflict with the world of science. Jan Čechal, during their mutual consultation, introduces intuition with these words: “Without it, science would be a set of random experiments”. Exploring these intuitions, coincidence and playfulness in art and science is Laura Fiľáková’s crucial point in this work, which she develops in different directions. Resulting form is a zine and its content is the entire creative process itself — evocative verbal play/activity, illustrations, scientific procedures and explorations and accompanying texts from people who participated in its creation. As a final act of the project, a collaborative movement workshop linking involved disciplines through a shared activity took a place. A photographic record of this workshop became a part of the zine and the very installation of the work.

Štěpánka Piskáčková & Michal Urbánek, Ondřej Wojewoda: Behind the Image of Spin Waves
interactive photographic installation, 2022 / Δ
Magnonics represents one of the new spin-wave-based technology fields that could address the limitations of the currently used CMOS computer technology, such as the power and size of microprocessors or their power consumption. Spin waves flow throuth magnetic materials by the precessional motion (like a spinning top) of magnons (“small magnets”). One way to observe spin waves is through Brillouin light scattering, where light and spin waves interact. It was the basic principle of spin waves that inspired the creation of the installation, in which a light sensor is activated to precessionally move the networked photographs, thereby interacting and telling different stories. Similar to the way that magnons transfer information and energy between each other when a spin wave is excited, or the way we encounter stimuli and situations that change our point of view and direction.

Notes:
* Currently on display at the Rampa Gallery (FAD UJEP — campus, Pasteurova 9, Ústí nad Labem). In January the work will be moved to Gallery 2 and presented as part of the accompanying program.
** The transformation of the exhibition in mid-January will determine whether the works will remain on display in Gallery 2.
Δ On view only at the Rampa Gallery until mid-January 2023.
▢ Presentation of the work in Gallery 2 from 8 December to mid-January 2023. 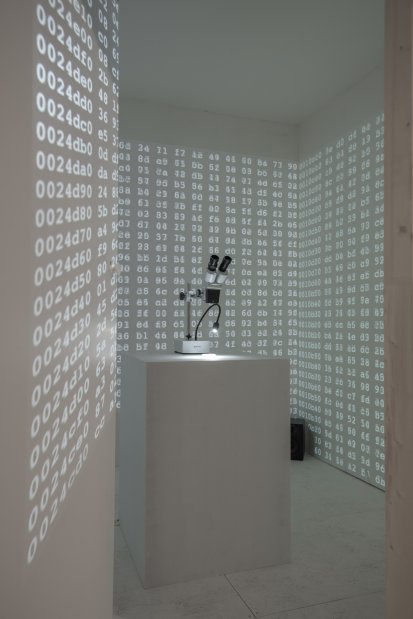 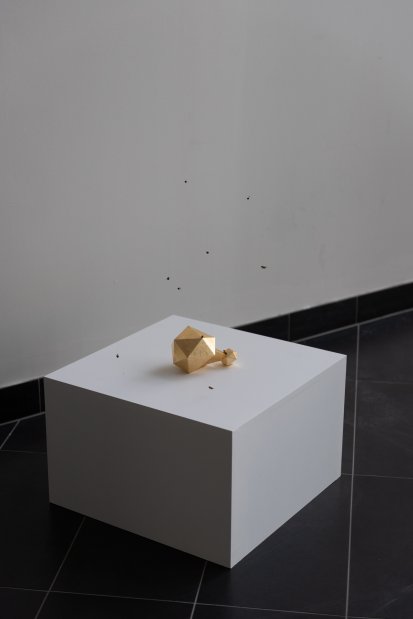 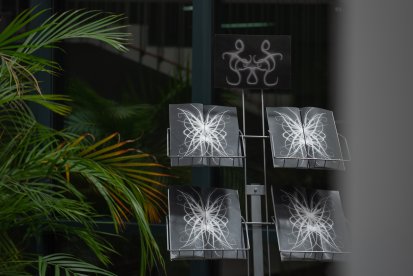 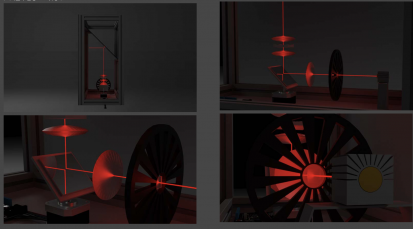 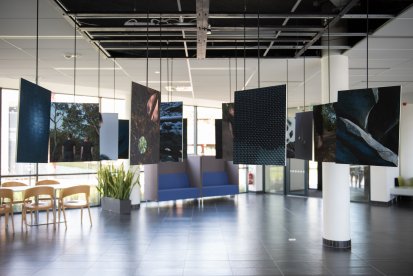