Anna Daučíková (1950) is one of the most distinctive woman-artists on the Czech, Slovak and even European scene. Her art combines a wide spectre of expressive media: drawings, paintings, photographs, conceptual photo collages, performances, and since 1990s, this solitary minded author has also been engaged in video-art. Within the context of the Czechoslovak arts of the post-totalitarian era (the end of 1980s and the beginning of 1990s), her works are of such a unique nature it is difficult to draw any parallels with other domestic authors.  Despite that, her pieces of art have been deemed prestigious and respected at recent shows and exhibitions abroad (Gender Check exhibition, MUMOK Vienna, 2010; Documenta 14, Athens/Kassel, 2017).

After graduating from the Division of Glass in the Architecture at The Academy of Fine Arts and Design in Bratislava, Slovakia (1978), she moved to Moscow for personal reasons and spent more than a decade there, occupying herself with glass works, structural numerical paintings and later also with conceptual photographs and collages.  The stay had a huge impact both on the key topics she would choose later in her life and on her mostly conceptual approach of a socially sensitive author and civic activist to expressing her inner attitude towards her personal, artistic and non-artistic topics.

The concept of Anna Daučíková’s exhibition ‘Policies of Gestures’ (Politiky gest) in the Ústí nad Labem House of Arts is based on several cycles from her pivotal era of 1980s and 1990s when the socialistic dictatorship was in remission in the Czech and Slovak Republics and Soviet Russia and the new ideological, social and economical model brought many uncertainties. Daučíková witnessed the organization and the workings of the Russian society, often truly bizarre, and she captured these phenomena with visual configurations and space-time gestures. Her cycle of photographs called ‘Moscow, Women, Sunday’ (1988-1990) was partially created for the purpose of documenting a specific Sunday situation in Moscow where one barely met any men in the streets. While men were getting a good sleep after a long Saturday night full of alcohol, women had to take care of their households with their shopping bags. Daučíková was very sensitive towards the fact that the languishing era of perestroika was drawing to a close in a political agony, and she wanted to capture one of the everyday fragments of the collective memory of the Russian soul with her feigned bittersweet nostalgia. And with the benefit of hindsight, the series can now be seen as a post-soviet memento.

The exhibition also displays a selection of quite an extensive cycle of big paintings and smaller drawings and monotypings with a single theme of number variations. All these gestural drawings with almost a calligraphic potential follow an abstract system – the numbers are placed in layers, cover each other, are approached as mirror images, form arithmetic series or cumulate in a chaotic way. As if they always want to coax each other, confrontationally, using the language of polarities and oppositions: chaos – system, hierarchy – anarchy, positive – negative, gesture – sign, development – stagnation, cold – warm, desire – apathy, aggression – passivity… The repeated decomposition and recomposition of numbers can be read as an attempt to capture the age-old inner fight between our own and foreign identities, systems and languages. (more in press release)
Anna Vartecká 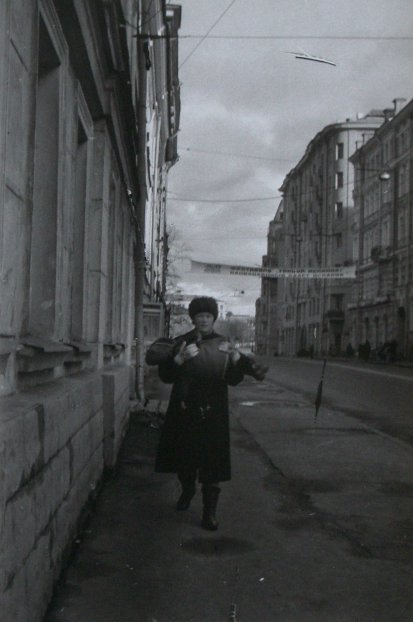